Raw Mango is one of India’s most revered fashion brand. The design house, famed for its contemporary reinterpretation of traditional textiles, has become synonymous with thoughtful storytelling. We worked with Raw Mango to create their viral Spring Summer 2021 campaign, Other. 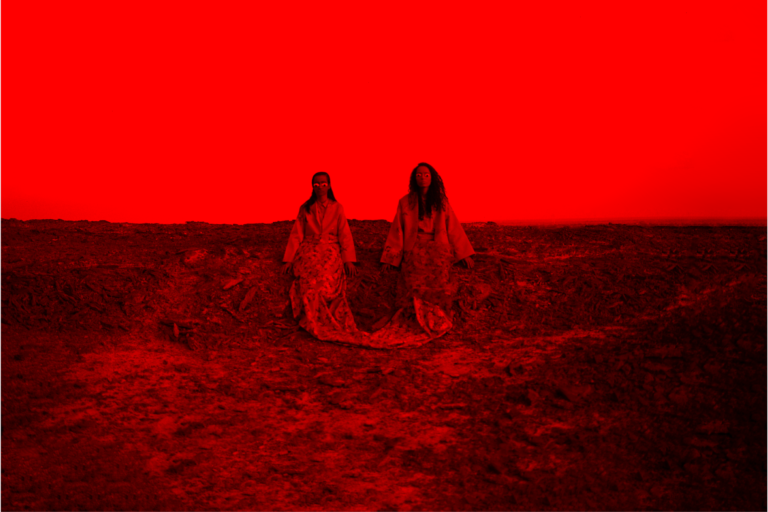 Aposematism is when animals take on visual characteristics to signal that they are venomous in an attempt to ward off predators. Bright acidic colours are a common manifestation of aposematism and became the starting point of our narrative for Other.

““The idea should cost less than 10 rupees,” Sanjay joked. Through Other, we learnt the importance of frugality; relentless editing and abstractness became our approach for the campaign.”

Founder, Sanjay Garg, challenged us to find meaning in aposematism that could live beside Raw Mango’s brand language. True to the brand, the idea needed to be simple while creating maximum impact; “the idea should cost less than 10 rupees,” Sanjay joked. Through Other, we learnt the importance of frugality; relentless editing and abstractness became our approach for the campaign.

While Indian nostalgia is a prominent visual device for Raw Mango, surrealism lives as a silent pillar. The label’s first published photo was of Sanjay’s sister with her face painted in the Raw Mango’s primary colour: forest green. Another campaign, Cloud People, imagined a community of cloud-worshipers with painted faces. Iconography and symbolism are abundantly clear to the informed. Antique deity figures litter Raw Mango stores, and symbolic inspirational imagery is plentiful on its social media pages. Even the inspiration for the campaign’s ceramic eyes came from a bronze statue lying on Sanjay’s office desk.

“While Indian nostalgia is a prominent visual device for Raw Mango, surrealism lives as a silent pillar.”

Now Form created all the graphics and collateral for the campaign, including a custom animated typeface. We also designed and coded a responsive and interactive web experience that ran for the campaign’s duration. You can view the website here.

Other had a polarising effect on viewers and quickly went viral. Many viewers found the images grotesque and scary and accused Raw Mango of going too far. However, a large audience found the images pathbreaking. Istituto Marangoni, Director, Diana Marian Murek shared an Instagram story with the caption “maybe the best campaign ever”. Every major publication in India wrote about the campaign, including non-fashion publications such as The Times of India, Indian Express and the Hindustan Times.

While we didn’t intend to shock our audience, we did intend to challenge a fashion campaign’s limits (in an Indian context). We achieved our goal of creating a conversation that questioned the vernacular of contemporary Indian design and fashion.

Screenshots of the numerous articles published on the collection